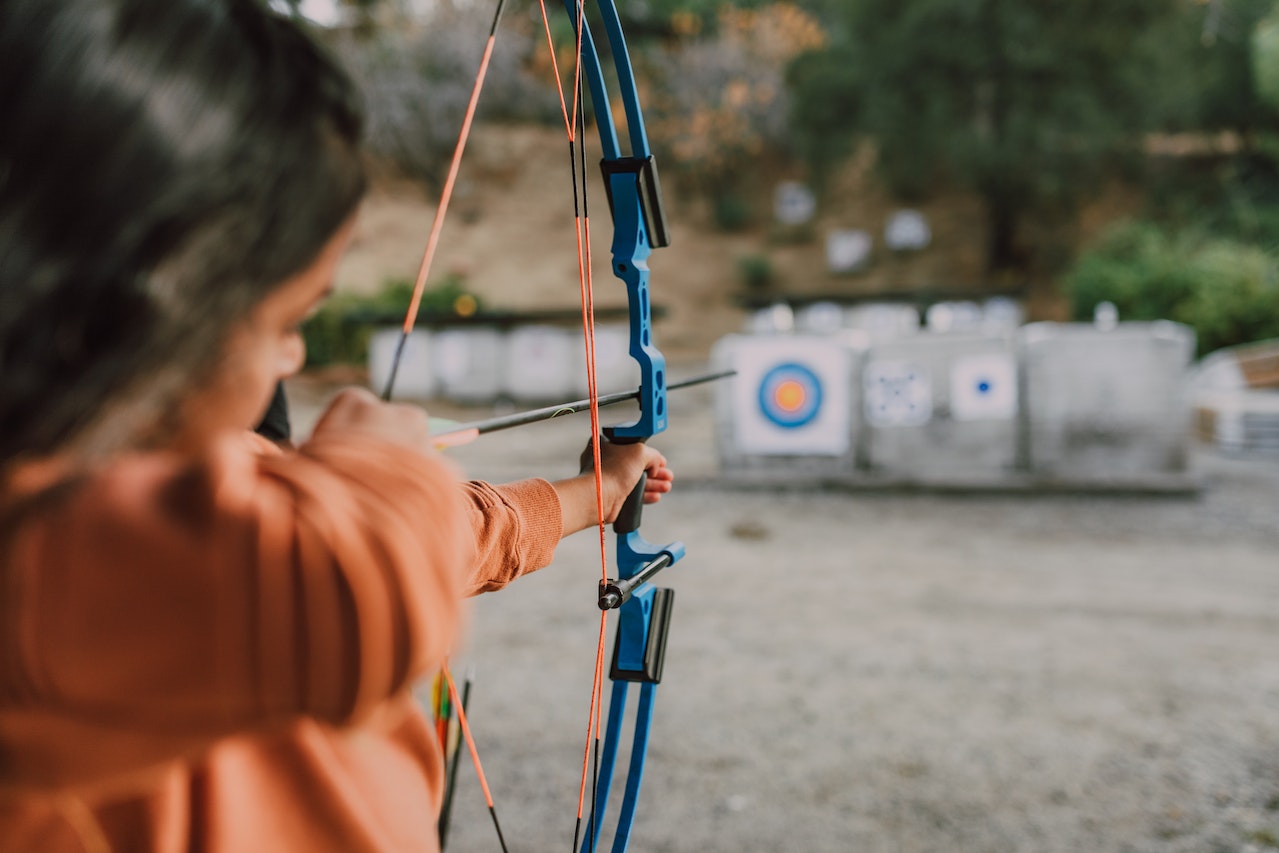 Lately, more and more archers are getting interested in learning how to shoot without sights. Surprisingly, this style of archery has been around for centuries across the world and is known as instinctive archery. But, what is it exactly and how do you do it?

What Is Instinctive Archery?

Instinctive archery has been around for centuries and it was actually common among longbow archers in medieval times. It was even used among the ancient Japanese.

This traditional style of archery is a true testament of pure skill and talent, so it makes that people would naturally want to learn this. Honestly, how cool would it be to shoot an arrow 100 yards and have it land exactly where you want it? Talk about amazing. I’m sold.

What Are The Types Of Instinctive Archery?

There’s basically two main types of instinctive archery: gap shooting and purely instinctive archery. When gap shooting, an archer will close one eye, align the bow to the target, and the shoot. Purely instinctive shooting, on the other hand, is more of a spur-of-the-moment concept. Otherwise known as the “see-and-shoot” method, this type of shooting is pretty self explanatory. Simply, you look at the target, hold up your bow, and shoot. No time to think, you just have to rely on what your intuition tells you.

In comparison to purely instinctive archery, gap shooting is a more premeditated type of archery. It’s more of a conscious effort while the see-and-shoot method is relatively subconscious. In fact, because of this, some people disagree that it is even a type of instinctive archery.

Now, you may be wondering: is there any benefit to using either type? And the answer is yes and no.
Even so, either one is better then the other. Gap shooting tends to work better for straight line shooting, while purely instinctive shooting works better for more advanced and angled shots.

However, there’s not much of an advantage to either beyond this. Like with anything, there might be great archers that use either method. Obviously, some might find one type of shooting easier than the other, but that doesn’t mean that it’s necessarily better.

How To Shoot A Bow Instinctively

The important thing to remember here is that you should use the right form at all times, especially when you’re starting. Starting with bad habits and getting used to them will make them much harder to correct in the future. Set yourself for success from the start and use the correct form.

If you’re not sure or if you want to double check, make sure to take a look at our guide: How to Shoot a Bow and Arrow.

I’m sure you’ve probably heard it a million times, but your stance is probably the most important thing in archery. To put it simply, your form affects every single thing that you do. Little changes in how you stand can drastically affect where the arrow goes. Therefore, you want to make sure that you get it right.

To start, you’re going to want to stand at about 90° to the target.

For right-handed arches, your left shoulder should be the one closer to the target and vice-versa for left-handed archers. As you get better shooting, you’ll be able to move away from this type of stance. For now, however, just stick with this one, because it’s a lot easier.

2. Use the same pullback method to succeed

The pullback is also extremely important to mastering instinctive archery. Little changes in your form can lead to vast changes in which direction and at what speed the arrow goes. Therefore, you need to make sure that your shot sequence is entirely consistent.

What’s the shot sequence? It’s everything that you do that leads up to your shot. Here are elements of your shot sequence that should remain consistent every time you shoot:

The only way that you’ll be able to get consistent with these things is to practice. That’s thanks to a cool little thing called muscle memory. Muscle memory is the ability of our muscles to “remember” certain movements and continuously replicate them with enough practice.

Think about tying your shoes. When you were a little kid it probably cost you a lot of mental-power just to get your shoes tied. But, what about now? If you’re like most people, you probably don’t think about it much and that’s thanks to muscle memory. Your muscles “remember” the movements, so you don’t have to think about it anymore.

How To Do The Gap Shooting Method In Archery

Now, back to the two different types of archery. The first one we talked about was gap shooting. This type of shooting is when you line up the point of the arrow with the target in an attempt to judge the distance and make an accurate shot. The way that it works is simple. Through practice, you learn how to judge distances and shots at different ranges.

Basically, it helps you get an estimate of how far under or far above you have to shoot to make your target.

But here’s something important to remember: not all bows shoot with the same trajectory. Therefore, one bow may shoot perfectly at 10 yards, while another may shoot at 60.

How do you measure gaps in archery?

Figuring out your gaps in archery allows you to determine how far below or above the target you have to aim, depending on your distance.

Next, move back to 20 yards and then repeat the process all over again. After this, do this for 30 yards, 40 yards, and 50 yards, respectively. You should write at this information down and keep it somewhere where you can see it. A lot of archers like to print it out and tape it to the edge of their bow.

With these measurements in mind, this should give you a pretty good idea of where to shoot. For example, if you shoot the target at 10 yards and the arrow hits 5 inches below, you’ll know that next time you’ll have to aim 5 inches above to hit the center.

How To Do The Purely Instinctive Shooting Method

Purely instinctive shooting, otherwise known as the “see-and-shoot” method is when you look at the target and shoot, without making a conscious effort to aim.
A lot of people think that this technique is difficult to master, but think of it this way: it’s like throwing a ball. When you throw a ball, you don’t necessarily aim it. You just throw it and it goes where you want to. Instinctive shooting relies on the same concept. To master it, you just have to practice until muscle memory kicks in.
It might take longer for you to learn this than throwing a ball, but you’ll get better the more you do it. It’s not impossible to learn, but it can take a few years to master it.

A lot of people might tell you that to get better, all you have to do is look at the target and aim. However, this vague advice isn’t helpful. If you want to get better, you need to practice on your form and shot sequence. The more repeatable your form is, the more consistent your shots will be and the better your accuracy will be.

Another thing that you want to do is to focus on the target. It might seem counter-intuitive, but don’t look at the arrow. You’re going to get distracted and your aim will be off. Instead, focus on a small spot on the target where you want the arrow to land. A spot that is about an inch wide in diameter is perfect. The reason that you want to do this is because larger spots will make it difficult to estimate mistakes and inconsistencies in form.

Lastly, make sure to follow-through with your shot. This means that you should stay still until the arrow reaches the target. Any small movements of the bow made right after firing will change the trajectory and direction of the arrow.