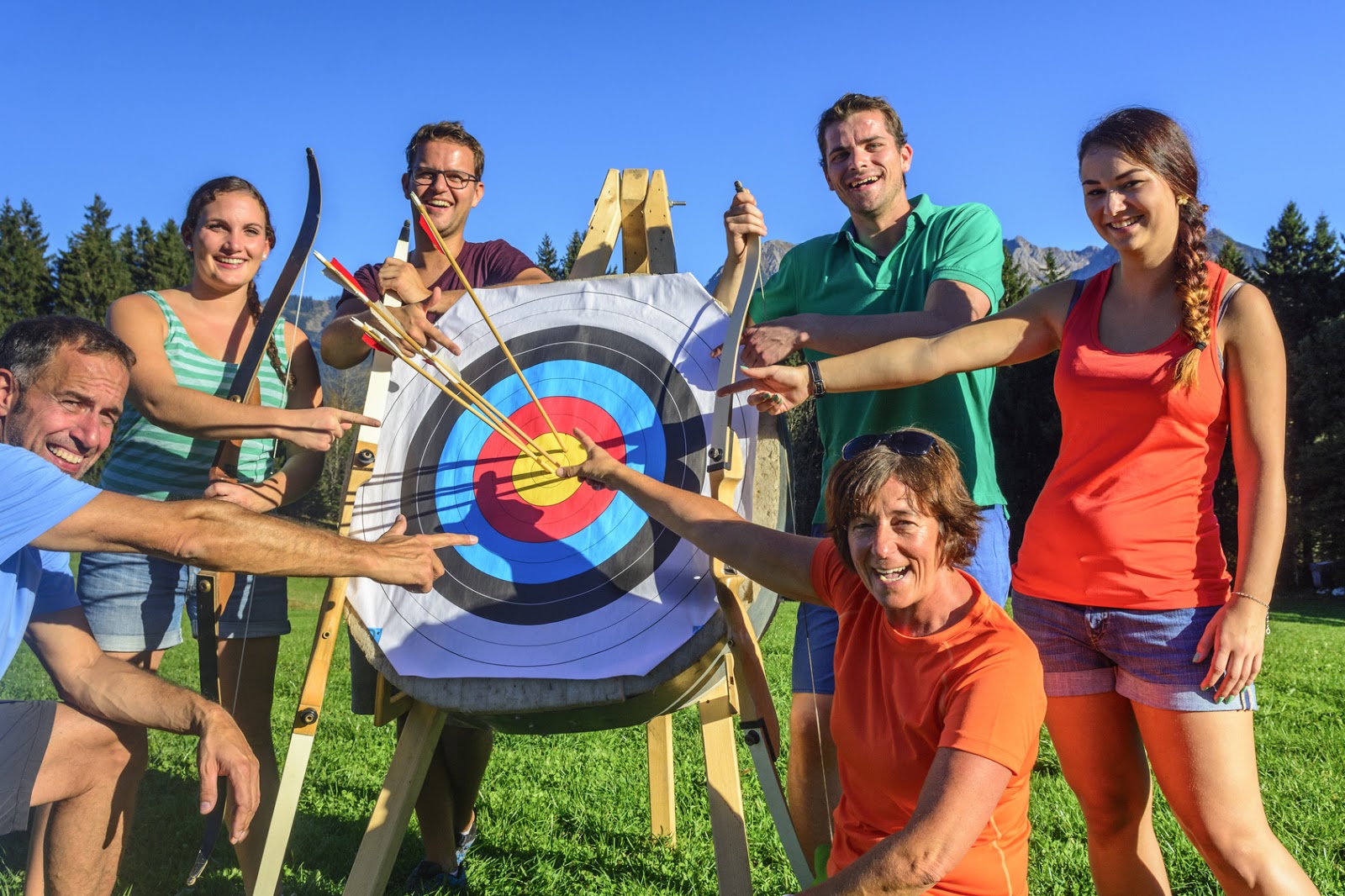 Every archer’s dream is to shoot better groups with a bow. Why? It’s a visual reassurance that all of our hard work has been worth it. The tighter and closer our groups get, the more we can see just how much we’ve improved. But what exactly can we do to improve? Here are 9 things that every archer can do to improve their accuracy and consistency:

What Does It Mean To Shoot Tighter Groups With A Bow?

1. To shoot better groups, take your bow to a professional

The best thing that you can do is to take your bow to your local archery professional. Have them put your bow on a press and make sure that your cams are tight. If your cams are loose, it might be due to an issue with a bearing bush. Regardless, it is important to fix this issue so that your cams can track the same.

If this isn’t corrected, you’ll find that your bow won’t shoot accurately and shots will veer off in different directions.

Another thing that you’ll want to have the professional check for is the position of all the elements of your bow. A small change in your arrow rest, for example, could lead to massive changes out in the field.

The spine rating of an arrow measures its stiffness. Typically, the lower the number, the stiffer the arrow.

This is important because you want to make sure that the arrow spine can handle the draw length and poundage of the bow. If the tension of the bow is too soft or weak, more tension will unnecessarily be put upon the arrow. However, if it is just right, your arrow will shoot straight and with more speed.

Many beginning archers pick a general area on the bullseye and just hope that they hit it. This is fine, but if you want to get better, pick a smaller spot to aim at. As you shoot, it will be easier to see the discrepancies in your form. Therefore, you’ll be able to become a better archer as you notice these problems and act accordingly to fix them.

Just remember to focus on the spot and don’t luck away until your arrow hits its target. Professional archers don’t rely on luck, so you shouldn’t either.

One mistake that many beginning archers make is that once they release their bowstring, they tilt their head or look away. As a result, this causes them to lose their form which, ultimately, leads to the arrow veering off target.

Luckily, this is a quick fix. When shooting, you want to follow through. For more consistent shots, watch the nock of the arrow as it travels through the air. Don’t pull your head away from the bow until the arrow has reached its target. Keep doing this and eventually it’ll become instinctual.

Another problem that is common in new archers is that they release their bow too soon when they fire. This leads to weak shots that hit lower than they would normally. To fix this issue, slow down. Assume your stance, take a deep breath, and pull your bow back. Stop for a second or two to note that you’ve drawn your string as far as it can go and then release. Keep doing this until you’ve formed the habit of pulling your bowstring all the way back. After a certain amount of time, you’ll be able to do this without making the conscious effort to do so.

Sometimes beginning archers have another problem: they focus so much on getting their aim right that they forget to use the proper muscle movements. Try not to aim too soon. In this case, remember to use your muscles to create a strong drawback and then follow through with your shot. Keep on repeating this technique, worrying less about aim, until you’ve got it down. You’ll find that after a while, you’ll be able to shoot more consistently and with tighter groups.

5. If you want better groupings, you might want a better stabilizer

Most times when you buy a new bow, it will already come with some sort of cheap stabilizer. Some of them can be good, but some? Not so much.

Stabilizers are important because without them, your bow can rattle and shake. An unstable bow is the worst thing that you can do for accuracy; they’ll be a larger discrepancy between your groupings.

More often than not, the stabilizers that come with a bow is usually not the best one out there. Unfortunately, with stabilizers, you can never really tell what you’re missing until you try a new one. You might be shooting decently with one stabilizer and think that everything is fine. That is, until suddenly you shoot with another and then, seemingly out of nowhere, your aim is 10 times better.

A lot of people can relate to this issue, but, luckily, there’s a lot of stabilizers to choose from. Click here to check out the bestsellers on Amazon.

6. The secret to tighter groupings is in your stance

I’m willing to bet that a large majority of the inconsistencies in accuracy come down to one thing: your stance. If a bow is up to standard, then there’s no reason that your arrows should go anywhere else if you keep your form exactly the same. In archery, every single movement that you do with your body matters. From where you place your feet, to where you hold the bowstring, to how you anchor your shots.

The key to overcoming this self-imposed obstacle is to form habits, so that you will repeat the exact same movements every time you fire your bow.

For more consistent shots, pick an anchor point and stick to it. This can can be difficult for beginners, but it’s especially important to stay consistent with this. The anchor point is usually spot on your face that pull the bowstring towards when you draw your bow. Pick a spot, like the corner of your month or the edge of your chin, and keep pulling the string back to that same place. It doesn’t matter which one, you pick one and stick to it. Otherwise, your accuracy will suffer. This is an easy fix, so take of advantage of fixing this mistake if you want to drastically improve your game.

Luckily, there’s a few things that you can do to help you learn. Want to ensure that you stand at exactly the same angle every time? Tape the floor so that you remember where to line up your feet.

The key to getting tight groups is to stay solid and consistent with each shot. Your form is fundamental to archery. Not only does good form promote better accuracy, but it also secures your balance and center-of-gravity.

7. Your groups will be affected by the positioning of your elbow

Something so simple, but so important, is the positioning of your elbow. Rotating your elbow straight is one of the first things that you learn in archery, because it can be dangerous if done incorrectly. Basically, what this means is that the crease of your elbow should be vertical, so that you can bend it across your body horizontally.

If done incorrectly, the bowstring will painfully slice across your arm as you shoot. Not only can improper form cause bruising and scrapes, but it can also cause inconsistency in your shots. As the bowstring hits your arm, it will direct the arrow towards a different direction. Therefore, if you want to shoot better, make sure to use the same form every single time until you’ve got it down to instinct.

Many archers, even more experienced ones, never really look at where they are holding the string. Unless you’ve been accustomed to grabbing it in exactly the same place, this could actually be hurting your accuracy.

Luckily, if you’re having trouble with this there’s a few things that you can do. Holding the bowstring in different places? Make a mark on the string or tie a small knot or two so that you know where to hold it. Then, make the conscious effort to hold it in the same place until you’ve got it down.

Little differences in how and where you hold your bowstring can lead to huge differences in where the arrow lands or in which direction it goes. For example, if you use too much finger tension, your shots will go off to the side and your fingers will probably start to hurt from the pressure after a while.

9. Invest in a quality release for better groups

A good release is one that is reliable and doesn’t get stuck. Don’t know what to buy? Click here to check out what we think are the best releases so far.

Want more information on how to improve your aim? Check out our post Archery Tips for Beginners: 10 Tips to Improve Your Game.

What Archery Equipment Do I Need?

What Are Bowfishing Arrows Made Of?